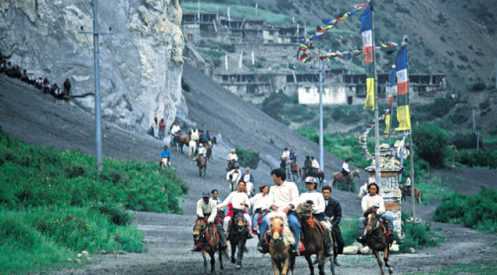 Manang, the land behind the Himalayas has its unique culture and landscape. Manang has many characteristics similar to Tibet, which lies next to the border.  There are many similarities between Tibet and Manang in terms of daily life, religion and the festivals they celebrate.

In 2013 the festival is going to be celebrated from 12th to 16th July. This festival is celebrated to mark the return of the horses and the livestock’s from the Leks (High pastures in the mountains)

The Males in the area take it as an opportunity to show the strength of their horses and their ability of horse riding.  Picking up the khata (silk ritual scarf) from the ground in full gallop is one of the challenging things they have to do and it requires good skills in horse riding.

The races, which are held in between Manang and Braga villages, are followed with the interesting and colorful rituals in the local temples. Most people in Manang, both men and women, would wear their traditional dress and nearly all villagers will take some part in the feast.

July, the month when the Yartung festival is celebrated is actually very good time to visit Manang. The landscape is lush green and flowers of different colors make this event a grand ceremony.

Since the valley lies in the rain shadow area rain falls are rare here and during July, which is season of heavy monsoon in other parts of the country, here it is short rainfall and rains very seldom. The temperature during July is very pleasant but the Mountain View is not as good as in autumn.

Accessing Manang for the festival has lots of options.   Following are the popular treks which take you into Manang.

Also Manang village can be made the final destination skipping longer programs, especially for the festival.

Just 3 days walk from Dharapani, trekker can reach this beautiful village surrounded by high peaks and stay several days, attending festival and making day hikes around the village. There are several options of hikes around Manang:

Tentative program for the festival

12th July– The festival commences after people start gathering at Teen Dhara. They sing a song while riding over their horses. Then from there, they move to the Thang where the race is held.

They hold some races and come back to Manang. At around 4 o’clock in the afternoon, both the youngsters and adult gather again at the Teen Dhara, sing a song and head down to the Thang and hold race again and go back.

14th July– The day’s program begins at around 4 o’clock in the afternoon. The villagers go to the Pocho Gompa and light the butter lamps. After lighting the lamps, they head to the Thang and race.

Then they go back either to home or gompa. At around 8 to 9 o’clock in the evening, the villagers are divided into two groups and one group is led to Pocho gompa and the other to Karki gompa. Then Oley dance is performed at both the gompas.

15th July- Villagers gather at Pocho Gompa in the afternoon as usual and go for a race at Thang. After completing the race, they come back to Manang.

16th July-Youngsters dance on top of the roof of the Gompa at Manang Village and concludes the festival.